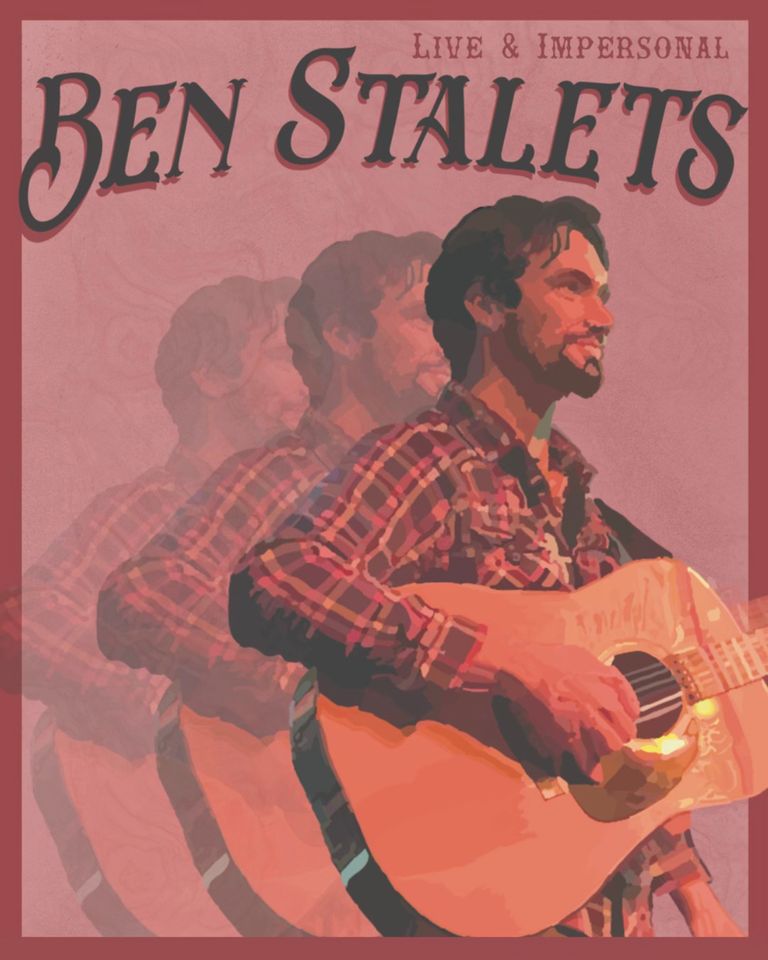 Ben Stalets Live & Impersonal
Ben’s hitting the midwest and southeast this August for a small run of shows. He’ll be doing songs, stories and selling stuff. If you’re near the following cities, mark your calendars, buy your tickets and invite your friends. This’ll is going to be one to remember.
8/25 Charleston, WV | Empty Glass
8/26 Huntington, WV | The Loud
8/27 Eaton, OH | Taffy’s
8/30 Nashville, TN | The 5 Spot
For more info please visit www.benstalets.net
Ben Stalets is not a songwriter; he’s a song. Realizing he couldn’t wash the Toledo off, Ben leaned into it. Inspired by the blue collar underdogs and anti-heroes the rust belt surrounds you with. Talking to Ben is talking to an old friend, and that’s exactly how his songs are written and shows performed. As comfortable in a bar room as he is in a listening room, by the 3rd verse of the first song, Stalets will have the room quiet enough to hear someone clutching their pearls, just before the refrain gives permission to laugh again.
After almost a decade of songwriting and performing under his belt, it’s pretty much your civic duty to catch Ben whenever he comes within 100 miles of your town.
Ben’s medley of soundscape has allowed him to open for a wide berth of critically acclaimed acts, such as Justin Townes Earle, Damien Jurado, Valerie June, Whitey Morgan, Local H, Reverend Peyton’s Big Damn Band, Cory Branan, Daniel Romano, Icarus Account and so many more. He’s also been a staple at classic music destinations like Nelsonville Music Festival, Wurst Celebration (wiener fest) in Mansfield, TX and as a return guest on Knoxville’s Blue Plate Special.
In 2021, Ben released Everybody’s Laughing on WhistlePig Records. With an abundance of caution towards the pandemic, Ben chose not to tour extensively for the release, going against his road dog mentality. However, the time off has only seemed to sharpen his dive bar wit and songwriting focus, making the shows that he has played his most engaging performances yet.
For 2022, Ben’s slated to release his 3rd studio album Lucky Dog, a collection of songs based on people he’s known or been. “It took me 4 albums to finally sound and talk like myself and I truly feel like a lucky dog for making it this far” Stalets said on the yet-to-be-released album. While the date is yet to be determined, WhistlePig and Ben have designs on a fall tour and album release cycle.
Now’s the time to hop on or you’re about to get dragged!
+ Google Calendar+ Add to iCalendar